A downloadable game for Windows

Snack & Slash is a cooking brawler game made for Ludum Dare 41. You are a chef, a serious, super serious chef. Your job is to create the most delicious dishes, with the most finest, and these ingredients just happen to be cute and sentient.

After you start the game you will be tasked with gathering ingredients that need to be prepped a specific way. For example, if you are tasked with getting 3 whipped eggs you need to grab the whisk from the kitchen, head to the fridge area, and attack some egg guys. You need to optimize your route to complete each order on time for your guests!

(If you are experiencing lag or sensitivity issues download the windows build! ( :

Music is from Songs For Paris by Dana Boulé http://freemusicarchive.org/music/Dana_Boule/Songs_For_Paris

How do i play

I am sad because it won't let me play, for I am on chrome OS and it says I can't play, I wish for this game to make it so it's available on other platforms other than windows.

i cant even get in the gam

how  do i play

I came here because of Jay from The Kubz Scouts

Had a lot of fun playing this game and editing this video! Worth downloading and giving a try.

This game was super cute and so much fun! I feel like, if you chose to, it could become this giant game with far more than just ten dishes. I almost ran out of time a few times and it really added a layer to the game! The art work was absolutely adorable as well! I did make a small gameplay video for it and if you got the chance to check it out I'd really appreiciate it! All in all super cute and fun to play!

I'm late to the picnic but at least I brought something to contribute, super fun little game!

I really loved this game- who knew viciously attacking your veggies and pasta for recipes could be so fun? LOL

Oh how I adored this game! I absolutely loved running around trying to murder innocent food. Great Work :D

Scoops of steak and whisked onion seems a lil odd but ends up being a fun lil game :)

Can you make a mac version of this game?

Really fun and cute game! I really enjoyed killing innocent beings for the sake of eating them!
I did a playthrough on my channel, ArthurPlays:

Hi i put your game in a compilation and i played yours 1st :D.

This game is very unique i thought i already seen every idea until i found a game where you legit go mass genocide on everything xD.

hahaha, thank you so much for playing! : D

Here is my game too.

dude, thats your dashboard. no offense.

ahhh, okaaay i will gave u the games so far sorry!

Here is the links:

i didn't mean to be rude, and i think that the games will look more harmonic if you create your own models

that's a very good, free animation, modeling and physics simulation software i use.

anyways, i don't know how to use unity or unreal, so yeah, that's much better than what i can make, i just made some simple games on blender

but i'm thinking 'bout installing unreal on my good laptop

This was short and sweet! I've been binging a lot of LD41 games and this is one of my favorites. The models and aesthetics of this game are really nostalgic. It reminded me a little bit of the Lickitung Minigame in Pokémon Stadium. The sounds and atmosphere was very well done. It definitely helped put a happy vibe behind all the madness that was happening. The only thing I noticed was the lack of a difficulty curve. I feel like it got easier as I progressed. Anyways, this was great! Thanks for making it!

Nice game :D i had a lot of fun playing it

It wouldnt let me play the game so can someone help me?

Snack & Slash is played firstly. I actually had a good time with this game, it didn't come to me what it reminded me of until the day after I finished filming. Overcooked, but hey still fun, as I've never played overcooked anyway. If there were more levels and maybe a deeper breakdown into recipes that would be awesome. Either way, I had fun playing this, and that's what matters.

Hey! Thanks so much for taking the time to make this, and we do get a lot of Overcooked comparisons, but that's expected haha. What a great video : D

Hey thanks so much for making this! I'm glad you enjoyed it ( :

As I already wrote Brieyh'leai via Twitter: The models are goddamn gorgeous and it made me nearly a bit sad to cook 'em up. :) I hadn't much trouble with the timing for each recipe, but instead I found it very fair without being too simple. It's a fun little hack'n'slash game and it's lovely to see your artistic progress as well as the progress in the development itself. Overall, I had a good time with your Ludum Dare 41 entry and that's why I happily recommended it in one of our compilation articlesabout the jam as well as I featured it in the corresponding gameplay video. <3 Keep up the great work!

Thanks for being so sweet! haha, I'm actually really happy to hear that you notice my art progress, I feel like with each jam I've been getting a bit better : D Always look forward to these vids, great work!!

I liked the art design a lot and the general feel of the game.

I'm just running into a problem of getting a feel for the hitboxes/hitdetection. Most of the times, I will swing right into a crowd, with the tool pretty much covering everyone (Scoop and Pan mainly) and none of them will be hit, while other times, I get some extra targets without really being aligned with them. It might be something with how the Unity engine works on my computer (It has some hiccups because of the old but very upgraded hardware) and it might be the source of those problems, but I would advise to create highlight on the front of the character (like a sort of crossairs) that allowed you to see where is the effective hitbox of the tool so you hit your targets consistently. Also, if it is processed by the physics engine, change that to fixed hitboxes, Unity has some hiccups when calculating hitboxes on the physics engine (I ran into some foods springing around the map when going up/down the sides of slopes or when they touched each other in the extremeties of upper plataforms).

But I would consider this a super interesting idea, and worth expanding upon. The game has a lot of potential and could become very fun party game in the future.

Simple, but very enjoyable. It's impressive work. If you added additional features I could see something like this being quite popular. I had quite a lot of fun making this video as well.

ahhh!! So cool, thanks for taking the time to play and make this video : D glad you enjoyed it!

couldn't play because my antivirus said it was potentially dangerous.

UPDATE: it came back clean

i'm now going to celebrate with champagne and aged cheddar.

it's a shame there's no aged cheddar in the game haha

ahh next update then ;)

hello! can you describe where you are running into the problem?

Hey! Thanks so much for making this vid!! ( : I'm glad you found this bug, that's pretty broken haha. We will work to fix it soon!

This is fun to play and the art is very cute! My only problem is that I tried to use my laptop trackpad instead of a mouse, which made the game difficult to play.

I love the concept - it's fun to play! 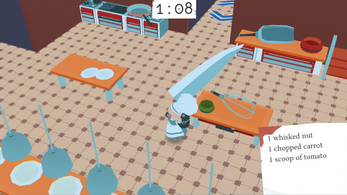 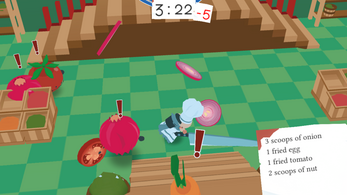 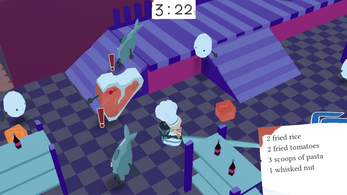